HOUSE ON FIRE is a solo play with music, the story of one woman’s life and loves from early adulthood via the various men she encounters along the way. Andrée wrote the script and composed the lyrics & music throughout. The show was workshopped & developed to production with musical director Shane O’Regan & director George Dillon.

HOUSE ON FIRE workshop production enjoyed a sold out run at The Union Theatre, London.

A clip from the live show.
One of Andrée’s original songs RESERVATION FOR ONE 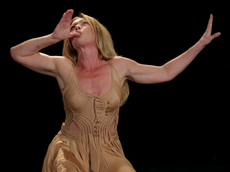 “A WRY,CYNICAL,SHARPLY OBSERVANT AND COMIC VIEW OF THE MODERN WOMAN. NOT FOR THE FAINT HEARTED”  Steven Berkoff